by Scott - No Comments

Some of my favorite tools I use everyday take an existing interface and show me data on top of it that’s hard to see. I love this because I don’t have to change my workflow to get value.

Here’s a few examples and use cases sales and marketing folks might find relevant:

A key way I use LinkedIn is to get introductions to companies I’m trying to pitch using the 2nd degree connection feature.

There is just two problems:

This company Conspire became very useful when they released a chrome plugin that sits on top of LinkedIn and reveals how close someone is to your target based on how much they’ve emailed.

This provided a much needed signal to me when I’m trying to figure out who I should reach out to for an intro.

A lot of times when I’m taking a more account based prospecting approach where I’m being very intentional about reaching someone very specific, I’m trying to figure out what the best channel to start a conversation with someone is.

Should I cold email them? Pick up the phone? Hit them up on twitter?

The optimal channel is the one that someone is most likely to respond to.

The Klear chrome plugin shows me how responsive someone is on twitter by appending a “friendly” tag on top of their profile.

If I see someone is very friendly or active on social, I can tailor my approach to starting a dialogue by engaging them on twitter.

I spend a lot of time recruiting these days.

Generally, my first touch point is always email. Talented Engineers probably get 20 LinkedIn messages a day from recruiters, which puts you in a bucket that isn’t necessarily conducive to a response.

A great plugin I’ve used to find someone’s contact information to accomplish this is called Connectifier. 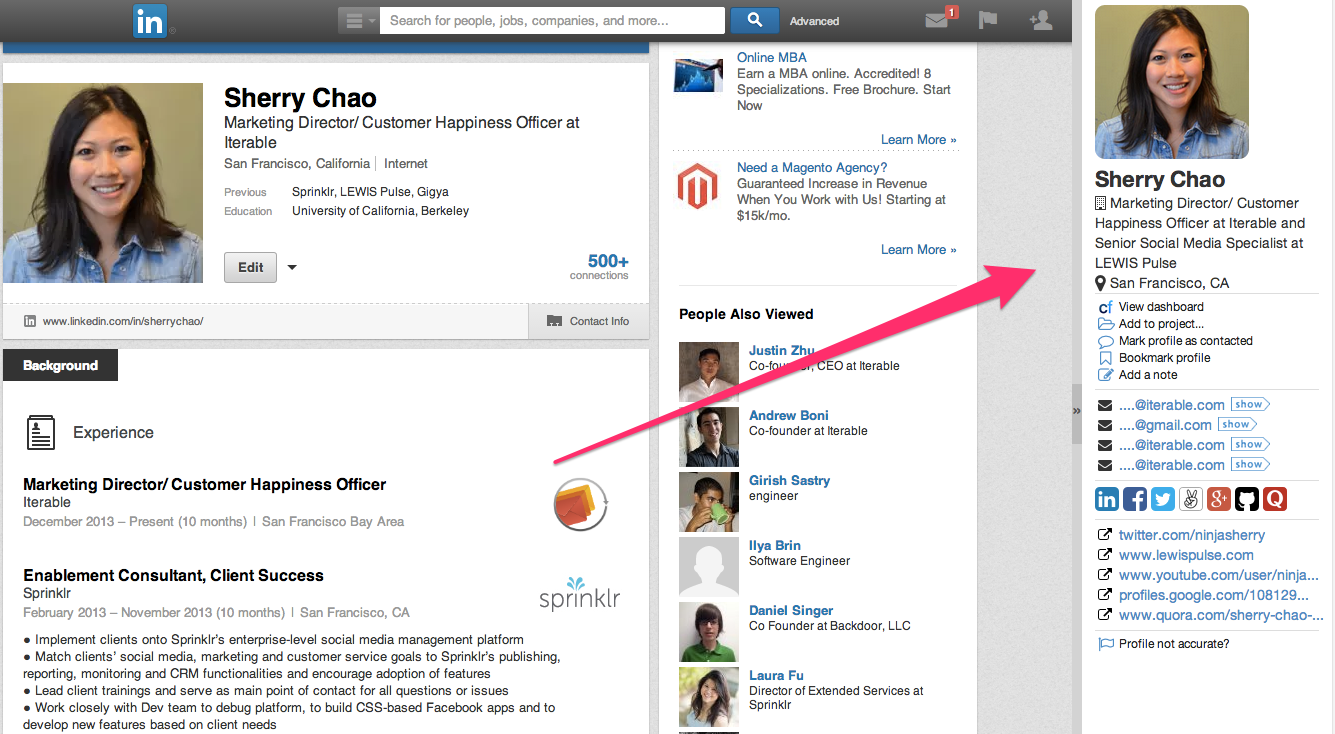 On top of LinkedIn, the plugin shows me all the other places this person exists online as well as their contact information. Many times I can see their gmail instead of work address. This is huge.

How to they accomplish this?

I’m not 100% sure but my guess is that they’ve collected and unified all the emails buried within the bottom LinkedIn profile pages, github profiles, and other places people often list their email. I’m sure there is some network effect when people sign up for their chrome widget where they might do some type of contributory model.

They recently got acquired by LinkedIn and am not sure of their status for new signups. You can also check out Connect6 and Email Hunter’s chrome plugin.

These companies have created value in the marketplace by making it really easy to see data within someone’s existing workflow that previously was hard to see.

Conspire and Klear have created their own data set while Connectifier has simply aggregated that data in one place. Both models work, but the first is usually more attractive because of the network effect that can be created as usage increases which makes their business defensible.

While working on Troops, I’ve thought a lot about this theme of making it easier to see data that previously was hard to find in order for salespeople to do their job better and talked to 100’s of sellers about this topic.

In many instances it’s not that you can’t see certain data sets today, it’s just that there is so much friction to seeing it today that people don’t do it. And as a result, they are less effective at their jobs.

Moving forward, I think more and more  successful companies will focus first on creating value on top of interfaces that are already sticky to gain adoption and then create value off these platforms once they’ve established a foothold.

The most exciting place where this is taking place is Slack. They are the fastest growing software company of all time and sit within a workflow that is ubiquitous to every company: communication.

It’s still early days for this ecosystem, but I’m wildly excited about its potential and ability to streamline work and surface data and intelligence to workers at the exact moments they need it.

If you can’t tell, I love this theme and these type of products : )

So I’ll pose the question, what solutions help you see data and intelligence today within your existing workflow? How has that changed the game for you? Are you using anything cool on top of Slack?